“Phuot” Cao Bang Vietnam Travel was the last trip of my student life and brings new experiences! Those joined with us on that trip were all  special because we together shared the best moments of youth!

In my group, there was a young girl who lives in Cao Bang province . That summer, she invited us come to visit her house. At first, it was just a small trip to visit her home but then it became an attractive trip to Cao Bang – Ban Gioc Waterfall. The trip had suddenly appeared in my life just like that!

We made the trip at the end of June. At that time, Cao Bang just has experienced several flash floods.

At that time, I did not know much about the concept of travelling the long distance by motorbike. Although I was used to seat behind my father in a motorbike when I was young to go for long days, but with difficult mountainous terrain, it should be really a great challenge. My usual characteristic is “great fear of death,” so I was in the car with another girlfriend. The other 8 members rode the motorbike!

The trip was urgently prepared in just 3 days.

At that time, I was too young, thinking that if we went out with knowledgeable friends, we don’t need to find out information before the trip. We just go to where We want! WE ARE GOING OUT, do not know ahead of schedule, high season, sunny weather or rain.

Because of living near the Luong Yen bus station, we took the bus from here. Currently, the provincial bus from Hanoi has been divided into different lanes. To Cao Bang, you have to go to My Dinh bus station . Bedding bus station is located in Thanh Ly, Khanh Hoan, Luong Sung, Hien Loi… with ticket prices from 8-10 USD/pass. You should book in advance to be active. The ride time is about 7-8 hours.

The road to Cao Bang is about 300 km. Time for riding Motorcycles can take on average for 8-9 hours. Currently, there are highways, time for driving cars only take about 5 to 6 hours.

Bus to Cao Bang mainly travel at night. There are no vehicles in the day. But that time, two of us did not know! Me and my friend took a passenger car with 24 seats, went through the National Route 1A to Lang Son and then went to Highway 4 – Lang Son province to Cao Bang. Departed at 8 a.m.

It was raining, it was hard to walk, it was very muddy and dangerous. With this long line, many people could get car sick and tired.

Thanks to passing through Lang Son that I had the opportunity to watch the Ky Cung river . Ky Cung is “strange” as the name of itself. While thousands of rivers flow to the East Sea, Ky Cung river is the only river in the Northern Vietnam flowing north-east to Guangxi (China). The river starts from the Bac Xa mountain which is 1 166 m in high and have a part of 243 km on Vietnamese land.

At the same time, the motorbikes group travelled along National Route 3 via Thai Nguyen province , to Bac Can province and then to Cao Bang. It was raining, so the trip was quite hard for them. Until 4 p.m, we reunited.

Luckily on this trip, we had members who are indigenous led the team. So, there were many benefits for us.

The next morning, we went to visit the historic Lenin stream, the Karl Marx mountain,andPacpo cave.

We had 4 motorbikes. We borrowed one more to carry all of us. I was carried by a female friend, so we had a lot of cares and supports from other motorbikes.

It was such a beautiful road with the green filed spread widely along two sides. Many villages appeared and then backwarded. The shadow of trees spread along the dirt road. After the rain, there were many puddles on the road, each passing car was a shot lum water.

The place was so beautiful, so we stopped to take pictures and a rest. The group had 3 cameras, people who hugged behind the rider, recorded all impressive moments.

The trip was just a sudden, so we did not know and also did not prepare protective gear, armor, raincoat … We just went ahead like that, the streets filled with joys and laughter.

The road was not so crowed as we were pounding. The weather was cool, the wind swinged with gentle sunshine to make the picture more fresh!

We travelled and sang together, sang the songs that we all remembered, especially the children songs, making a bustle around the corner of the street. People passing was surprised, looked at us and laughed, then waved us.

The group goes through Kim Dong’s tomb – the eldest brother of the Young Pioneers. We are all part of the team when we are young! If you have time, you should visit him.

Kim Dong and his teammates were in charge of delivering, shuttling the Viet Minh and transferring mails. Once in touch, he discovered that the French armies were invading, so he distracted them for his teammates to send their

soldiers back to the base safely. Kim Dong died on the bank of Le Nin stream on February 15, 1943, just 14 years old. 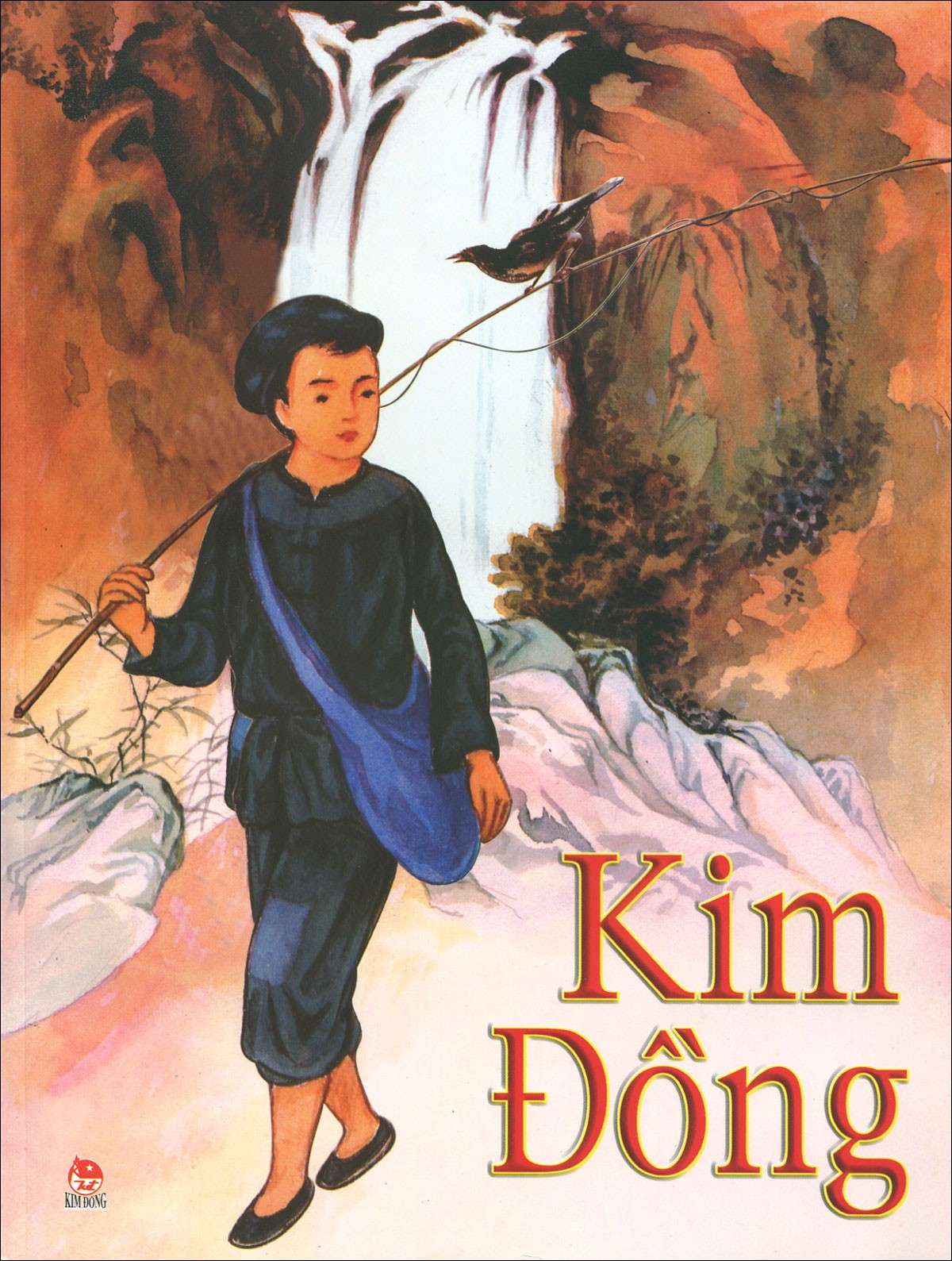 In 1997, Kim Dong was posthumously awarded the title of the Hero of the People’s Armed Forces. A historic relic martial of hero Kim Dong was built in his hometown – Cao Bang.

Hearing the murmuring stream from far away.

Lenin stream is like a clear blue jade. After the storm, streams flowed downstream. Streams flowed through the cliffs of trees, created lot of white foam. The water was cool, clear that can erase the heat of summer noon. As deep in the forest, the shade spread wide as the cool. On the way, the vines were so squeezed, that squeezed from one tree to another, held together.

No one told us, we removed the shoes or slippers and all furnitures, especially mobile to avoid water. Then, we together held hands to avoid slippery.

Karl Marx Mountain is glistening green in the jungle. All of us drifted down the stream and took pictures here.

Mount and Water, far away

There are so huge and great,

The Lenin spring, the other Karl Marx

Next to the stream, there are 1 or 2 stalls selling beverages. The streams beckoned constantly, so the brothers jumped into the water. I was part of the “serious youth” so the 2.3 friends kept things for everyone and focused on what was needed to support. Because really, the water was flowing, the floods can not jump down to play it all! Pacpo cave was so wet after many long rainy days. It is so small, just enough for five people in the cave. It is said that when Uncle Ho was here, the cave was wider and much larger. But then it was destroyed after the war.

Le Nin tream is really peace and like a jade in ordinary day.

Uncle Ho chose Coc Bo  (localized name means “head”, Pacpo is the name of the village, but familiar is called Pacpo). The reason for this name is because  from the cave, there is a road leading to the other side of the border and the bottom of the mountain with streams flowing through, it is the stream of Lenin.

“Historical Table” is near the water flooded all over, it took us a while to recognize. Tables and benches are fenced around by protective iron, flood waters overflow the whole area into a small lake.

As Vietnamese people, who do all know the four verses of Uncle Ho:

Morning to the stream, evening into the cave

It seems there were only 10 people in the middle of the forest! We were all wet but still very happy.

Playing bored, the team prepared to come back but suddenly a member dropped a motorcycle key. Maybe  when we played in the water! So, we had to call the locksmith from the town to fix it. All of us needed to wait for too long!

The butterfly season in Ninh Binh – Cuc Phuong has never been this brilliant!