Land of the myths – Happiness Road – Ma Pi Leng Pass. These trips did not make us become giants, but helped us grow up a little, think bigger and feel the true living than ever.

Before the Ha Giang trekking, I did not know where there was a famous tofu. Tofu here was processed by the H’mong people, milled thoroughly to astonishment, ate soft as it drifted into the stomach! Ate that kind of tofu liked eating …tofu soup!

The last day was Sunday, we went to the traditional market and had breakfast. The delegation divided into two groups, the other went to eat triumphs and rolls, I went to eat beans group! Tofu here is the true name! 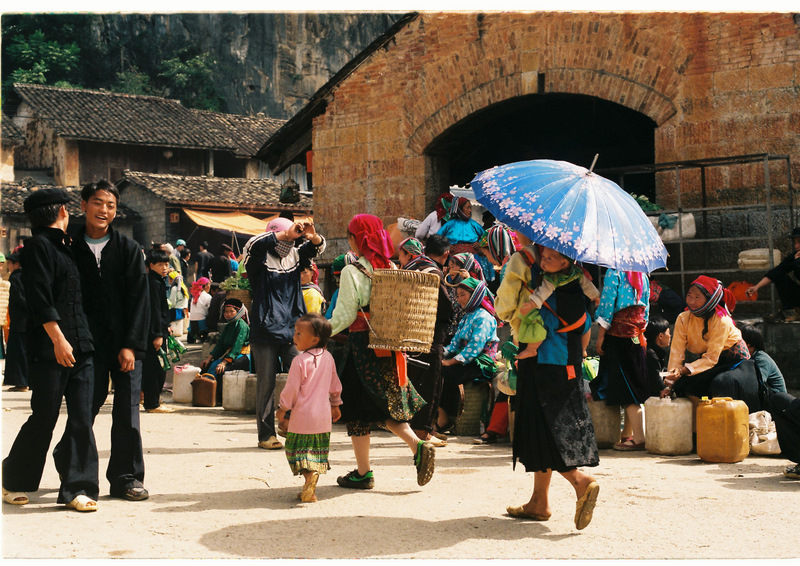 Ha Giang has a lot of specialties of mountainous areas such as grilled rice Bac Me, Au Tau soup, sour Pho, 5-flavors rice, Buffalo Meal, Grilled Mushroom, Honey Mint, If possible, you should try to enjoy all the food here!

After having finished the breakfast, the group continued to separate small to explore Dong Van market. Weekly market was the unique session only on Sunday. On this day, the quiet old town became crowded with colorful colors of the Dao, Mong, Tay, Nung, Giay, Lo Lo costumes … all over the mountains to come there. Seeing their hands with pigs and dogs to sale … was a truly memorable experience. Someone had to prepare and go there from 3am, passed through the mountains to the market.

The main products were agricultural products, produced in the area by the local people. This was not only a place for trade, exchange of goods but also a place for highland people to meet and exchange.

Many families went shopping. The mothers went shopping while the fathers went to visit friends, drink wine, eat triumphantly, blew the tube; Children and adults went to the market to hang out with old friends and make new friends.

In the afternoon, the group passed through Meo Vac town.

Ma Pi Leng originated from Chinese, meaning “nose of a horse”. I wanted to describe, climbing up the stairs, dangerous as horse nose. However, according to some indigenous H’mong, the proper name of the pass was “Pia Li Leng”, meaning “cat nose bridge”.

Ma Pi Leng was one of the “top four mountain passes” in the North of Vietnam, next to O Quy Ho Pass, Khau Pha Pass and Pha Din Pass.

Ma Pi Leng Pass was known as the most beautiful pass in Vietnam. From here, you can view the Nho Que River as a blue silk strip. Mist covered as foreground.

Happiness Road, one of the place you cannot miss on the Ha Giang trekking, heard the name had demonstrated as happiness, the more walking on the road,  the more happy you became.

Happiness Road began construction on September 10, 1959 with a length of about 200 km running from Ha Giang city through the Dong Van stone highland and Ma Pi Leng peak to Meo Vac. After 8 years of construction, the road began to operate on March 10, 1965.

8 years of hard work, the natural challenges of young people at that time connected Meo Vac with the world, helped people here to live more happily and fully. The road had brought happiness to this land, used blood, sweat in exchange for the future.

The country was still in war and poor, the class of young people eagerly hit the road. The plateau was cold, towering, the soil was easy to hatch should be carefully, meticulously, bit by bit. The tools were rudimentary, only the hammer, the embankment … completely made by human hand … All made into a MIRACLE!

Currently, the road was constantly being upgraded, maintained to ensure traffic smoothly.

After all, eagerly, we came to take photos with the buckwheat flower.

Buckwheat flower were also known as black rye, buckwheat, triangular veins, oaks … This particular species did not like water and liked to “challenge” in the rocky plateau. Once harvested, the crop would last about 3 months. Small flowers, many colors: white, pink, purple … not fragrant, soon hatched. If a buckwheat flower stood alone, no one would pay attention or say good compliment. However, the Buckwheat flower field was different, the flowers lived next to their compatriots, together they shined beautifully. Fragile flowers, full of vitality, courageous with the wind of heaven.

Thanks to that beauty, millions of people came here, Buckwheat flower also had many useful functions such as making cake, medicine, cosmetics, wine …

It is said that Rice fairy and Corn fairy went sowing seeds on the human world. Rice husk, maize do not know what to do poured into the ravine. Maize, rice grown for seed. People take grain to eat. When the corn in the house was dry but the next crop has not yet arrived, the hunger over the village, afternoon has long in the woods where no one yet to cook. So everyone gathered and went all over the forest to find food. Many days passed, all the caves and alleyways have been searched but still have nothing to eat. One day, flying in the wind strange smell, so far unknown. People go to the ravine. Everyone was surprised, a forest of tiny flowers stretching from mountain to hill. Look carefully to see the leaves are triangular. When the seeds are brought to eat as good as corn and rice. The belly was asleep without crying for food again. The smoke flew in every direction. Because they are rice houses, bouncing from rice bran, maize buds, so called circuit, the leaves are triangular so called “buckwheat”.

Please noted that taking pictures with the buckwheat flowers, garden owners shall charge you with a fee. The average price is 0,5 USD/ person. Because they had invested much efforts and money in the garden for the harvest. You should always be very careful when taking pictures to avoid making the trees fallen because flowers would be crushed or destroyed. For many years, some pictures of others travel groups by motorbike put their feet in the flower garden created a bad reputation for other travelling groups, affecting the whole community. Few rude people consciously made the local people work hard to protect the garden!

However, kept in mind and found out exactly who the owner of the garden was to avoid losing money twice or giving the money to the wrong hands. Many people took advantages when the garden owner was away from home. They gardened and saw guests who wanted to take pictures, then they collected money, until, the real garden owners came back.

The photos you saw were taken from our actual trip. I asked the group and the photographers to select and post on a few sheets.

In addition, there were photos collected from the internet, also thanks the authors – people who love the land of Ha Giang!

Travelling away to come back home

We had lunch on the road in a cafeteria. In addition, the yard is full of hot motors due to long journey, flags, paste numbers, luggages. In the restaurant, the band members sit in groups, but randomly because most of them wore red shirts with  a yellow star. When lunch was finished, the whole team got down on the table, each person found a place for themselves, then they rested, relaxed 30-45 minutes and then carried on.

The motors were on the road, time also drifted. Sometimes I did worry that maybe we could not be on time in the evening. Each motor lined after each other when the sun slowly went down. Hungry, each motor shared the last hot sausage and bread, ate quickly on the road.

The feeling of returning was as eager as going back, but lighter, more peaceful.

We came back to the city when the sunset was off. 12 motors parking berths were safe.

Again, all packages were summarized and then divided to assign to each person. Yesterday, it was raining forecasted, who expected the weather was so beautiful, there was little sun shine, so most raincoats were not used. This was the “Sunny Wish” of the eldest girl in the group! The drivers handed over the motor to the garage. Leader and deputy leader tackled the problems of money costs.

Around the area of ​​the bus station, there were many rental homes for hot and cold shampoo 1-1,5 USD / person. Everyone took turns taking dinner and bath. The bus station also had toilets for guests to change clothes and go to toilet.

8 hours of driving. Everyone slept and did not care about anything else. The bus went directly to Hanoi.

At 5 a.m to My Dinh bus station, we hurriedly compiled and separated. Those who were close to each other call the taxi. I went home to sleep again, was going to work normally, still extremely fine!

Unfortunately, the next morning, I lost the phone so there were not many photos to show. Luckily, there were still the photos in the camera!

This trip, each person fee was 90 USD. we shared all costs of motors, food and other equipments.

Wish you have a unique trip of your own!