Home Amazing Viet Nam The Mid-Autumn Lantern Parade in Tuyen Quang – Get back to our...

Lonely in common of Na Hang, I need to find the way to go back to Tuyen Quang city before 8pm to enjoy the Trung Thu Lanterns Parade – the reason why I am here. Money in pocket is running out and I missed the last trip…

Get back to our childhood – The Mid-Autumn Vietnamese Lantern Parade

After a few seconds being the listlessly one, I moved to the roadside tea shop to ask the local for information. This time there is no public vehicle. The tea shop owner said I could wait until 8-9pm to catch a motorbike taxi to the three-way crossroads that cut the highway to take a Ha Giang night bus to go home. And one more choice is the 500k motorbike taxi.
Almost them, the shop owner, the oldies to the local that live nearby, the motorbike taxi driver advised me to give up because of being in common forest and mountain, how to be home?

The sky was gradually darker and darker, I need to get back to the city to enjoy the Parade – the major purpose that lead me to Tuyen Quang, I could not wait here until 8-9pm. The remaining money in my purse was not allow me to take a luxury motorbike driver. Not including to the mountain road, so long, and desert at night.

…
But I have 1 more choice: HITCHHIKE. I didn’t believe that there is no personal car or truck on the way to be in the city. I have CONFIDENCE, I will get whatever I want to do, the more they said that I could not do, the more I wanted to do! I TRUST more, the God do not have the heart to let me miss this splendid Mid-Autumn on Earth!

I had to admit that…I was so crazy and daring! Until this moment I am still unable to picture it! Actually, the HITCHHIKE to go back to Tuyen Quang was…my faith trip!
In fact, the HITCHHIKE form was used by a lot of “flick off dust” traveler to save expenses or just simple as I do it because I was ran out of money! And the most outstanding appearance for this was Huyen Chip – The Author of this famous book  Pick up your backpack and Go . From Asia to Africa with the language and skin colour barrier, she was primary used HITCHHIKE, especially when she is in common desert place. As a matter of course, there is no public vehicles at the places like that.

And I didn’t disclaim the risks when you accept to be in the vehicles of people that you may see them once in life and you don’t even know who they are? But think for them, they don’t even know you too and they just helped you when you need! Reality at that moment, you had no choice and the truth is THE GOOD EGG is EVERYWHERE!

This is not my first time I asked somebody for a lift. I tried to take lift in Ho Chi Minh city, Dong Anh (Hanoi) about 2-3 times.

Said to be done, I got out showing the sign of hand, 2, 3 and 4, 5 passed by vehicles, but no vehicle stop. After 5 mins, I decided to take lift from a truck! Half an hour elapsed, there was no hope. The road was getting uninhabited now became more and more deserted. Everyone saw my waving to get a vehicle just smacked the lips, they told me to stop! See, you were untrusted by OTHERS, let you took lifts!

When you showed the help signs, you believed them. Received the sign and helped you were the trust from another. The trust has to be come bidirectional.

… Just disappointed so the car that passed by me… stop! I turned around and waved goodbye to the Na Hang local and run into the car. It was the beautiful 4 seats car. The driver is around 30 and very polite, clement and the pretty girl that sitting on the first seats. I asked if he went back to Tuyen Quang and let me take lifts. He said he just back to Chiem Hoa, roughly 1/3 path. As grasp of gold, I said: “Yes, please take me to Chiem Hoa, I will continue hitchhiking, I will be home anyway…”

I get in, talk to them about my journey. I got to know that they are on the way to get marry. He is the Tuyen Quang Branch Manager of the biggest corporations in this city.
To Chiem Hoa, they help me to stop in common of the district three-ways crossroads, and many vehicles passed by. I continued the journey of hitchhiking, half an hour elapsed with nothing better.

The light left the ground, the sky is completely dark.

Some vehicles stopped but they just closely move somewhere nearby Chiem Hoa.
In the far away Na Hang I got hitchhiked but in common Chiem Hoa three-way crossroads I had to give up here?

…
It was over 2 hours to be in the city! If I could not leave in a hurry, everything would run out of control and increased implicit threats.
When I was catching, a lady came. She proposed that we will catch a taxi and divide into halves – 12 USD per one. Cos she had urgent problem to get back into the city. After 10 mins thinking about it, I agreed with her.

Honestly I was too trustful, when I was in I kept drowsing cos I was so tired, I let her and the driver talked to each other. She need to go back to Tuyen Quang to catch a passenger car to Hanoi and then has an urgent fly to Saigon. Hence, the uncanny predestined affinity let us met each other!

The taxi drove quickly so it didn’t take a lot of time to be there. As caught up on lost sleep so when I got out, I felt highly enthusiastic and full of energy for the night discovery trip.

…
Quick dinner, I wandered all over the streets, went on foot to the six-way crossroads. When on the road, there were a lot of lanterns that was shown in the yard, turned on and finished the ending stage to pass the troops in.

The pictures that I took could not show much about the reality, these lanterns carriage are vivid more. The dragons…some wagging their tails, some shaking their heads. The Tam just get in and get out from a Diospyros decandra… A lot of “rocking” lanterns that had no different than the Disney cartoon that stepped into the reality.

One of the most “collide with each other” was Uncle Ho (Ho Chi Minh) and Truong Sa … Lots of lanterns was imitated as the famous folk stories such as The Turtle and Rabbit , The toad lawsuits Lord, the Rat Wedding …and because it was the year of Goat , so I counted at least 3 carriages showed up the theme of the Two walking goats on the bridge…

I got closer to the lanterns, I saw every small particular was handled carefully and exploited, glamourous and precise.

Each carriage had at least 1 dynamo, 1 individual speaker, and their own music playing. Some of them carried 2 more big fans front to febrifuge for the lanterns. The assiduous carriage pushing ladies, followed the carriage. The hasten dad carried the water bottle, jogging to follow the carriage, take the fan to escort the young. Every kid that sat on the carriage shows the bright eyes, sometimes when 2 carriage face another, the whole society acclaim to greet with a wave, bustling the street corner! I could see the pregnant lady who still traveling with the carriage flow. Some of them was too professional to have the leader that whistled to orient especially when the march follow zigzag shape!

The imposing oldies beating the drum regularly to achieve that resounding street and district.

Alternately in common the carriage were some lion dances and beating drum carriages of the teenager group.

To the six-way crossroad, people with each other concentrated very crowded. The Vietnamese lanterns carriage from everywhere heading to this place. Everybody hang up the phones to record and take photos, the motorbike was raised up over the road.

Because this was the “Show up the lanterns” competition to find out the most beautiful ones so some residential area hid the product until the last minutes, just parade by the drum carriage, decorate simply with some flower lines and flash-light.

The Tuyen Quang Festival officially launched at the full-moon night, a week after. Then the carriage will parade around the city in the greeting of the local.

I had 2 round at the six-way crossroad, the parade ended up at 9.30pm, I came back to hotel to prepare for the next trip – Tan Trao the day after. 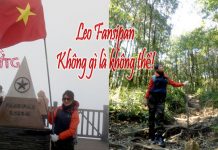