The improvised trip, improvised schedule, improvised preparation, we went to Cao Bang like that! Along with the trip that is planned carefully and closely, this trip can make the sky hatch.

On the third day, it rained, plus yesterday we were too tires, the group tried to sleep more until late morning. So we only went to visit Cao Bang, explored the Northern land and ate specialties.

That day, we had the opportunity to enjoy baked goat, ant egg cake, roast duck … Of course the host guided us to the best restaurants.

Cao Bang’s specialties include famous names such asroast duck with 7 tastes, chao cake, ant egg cake, sour Pho soup, Trung Khanh chestnut,. Thanks to a friend living in Cao Bang, we always receive gifts which is the golden chestnut, fragrant! You shall know that the Trung Khanh (Trùng Khánh) chestnut is only available in the autumn from the end of August in lunar calendar which is around September or October in solar calendar each year only! Chestnut “other times” is derived from another place!

The last day of trip we went to visit the Ban Gioc waterfall (Cao Bang), near the Chinese border, is completely different.

That day, Cao Bang was hot as fire, the popular weather of the summer on June. On the map, Ban Gioc Waterfallis about 85 km from central Cao Bang. At first, we expected it only took 2 hours to arrive. But in contrast, with mountain road cliffs, many downgrades under construction, plus zigzag road through the mountain, it took us the whole morning to arrive!

In the group had a young girl, the day before  she discovered a good book. So the whole trip, She sat behind the motorcycle and …. read attentively. Regardless of whether the car stopped or driven, she concentrated on her job of reading. The road was bumpy, she was devouring every page, could not stop her eyes from reading.

This trip, the group had some motorbikes broken 2 times. Once near the house, once in the middle of nowhere, the whole group stopped, looked for car repair shops and asked for help. Surprisingly,  the “senior” motorbike of the group had nothing happened! Continuously going through the road.

There was many obstacles and difficulties but they did not stop us from playing on the road. On the contrary, the excitement when coming to Ban Gioc waterfall was increasing!

Mountains to mountains along the Cao Bang. The winding road winds like silk stripes across the mountain. Far away, undulating green mountains were very beautiful. On the side of the road there were the rice fields, corn fields, also we saw the house roofs of the people living nearby. If you go in October, you can see the triangular flowers blossoming in the middle of the valley.

Near to Ban Gioc waterfall, the road runs along the clear blue river and bamboo trees. It was early afternoon but just into the territory of Waterfall felt the water splashed in the cool air. From here, we can see the white foam bubbles at the top of the tree. The water movings ranged through mountains. Someone said that each waterfall is a huge air-conditioning of nature, which is so super true! The whole space was overwhelming, full of life as the distance to the waterfall was closer and closer.

Ban Gioc Waterfall is the Vietnamese name for the waterfall, and China is called the Duc Thien Waterfall – Ban Uoc. Waterfall is located on Que Son River.

Ban Gioc Waterfall (Bản Giốc) includes the main and secondary waterfall with a total width of 208 m. Ban Gioc waterfall is divided into two parts, the southern part is called High waterfall, this is the waterfall because of the small amount of water. The Low Waterfall is the main waterfall located in the north.

The secondary waterfall and half of the main waterfall of Ban Gioc Waterfall belongs to Vietnam in Dam Thuy commune, Trung Khanh district, Cao Bang province. The rest belong to China.

After we stored the motorbikes, we rushed to the waterfall, like the children rushed into the mother’s heart!

All of the dust, the heat along the road was disappeared completely, everyone was happy, did not scare of wetting clothes. Some of them fell off because of slippery roads!

Ban Gioc waterfall (Cao Bang) is so huge, so majestic, no cameras can capture the beauty of the waterfall.

More than 5 km, it is the Nguom Ngao cave . According to a survey by the British Cave Research Associationin 1995, the Nguom Ngao cave has a total length of 2144 meters, with three main doors: Nguom Ngao, Nguom Lom and Ban Thuon. There are many stalactites and stalagmites with various shapes and forms.

“Nguom Ngao” in the Tay language means the cave of Tiger (Nguom: Cave; Ngao: Tiger). In ancient times, there were many living tigers, often in the surrounding villages to catch cattle. People trapped all tigers. From that onwards,  people can live happily.

Corn field across the top open the entrance to the mysterious! The road to the middle of the mountain, in a valley which is wide and beautiful as in the ancient movie.

Nguom Ngao is so beautiful as a part of the galaxy! Worth visiting! Stalactites shine in the dark, is the million years of creation! The cave is wide and high, one way is high place like a giant auditorium, another way is like a low room. As soon as entering the cave, the temperature immediately dropped, and it was cold. In the cave, we heard the water dropped and dropped. Each drop sounded interesting. Because water is very clear and pure, we could look down to the bottom. The bottom of the cave was naturaly cut up into layers of layers which are extremely beautiful!

Perhaps the most impressive was the giant lotus, where you can post magic photos to create any stories you like.

We got out of Nguom Ngao cave when it started dark. The group quickly came back on the motorbikes.

Soon, the darkness came down, the road had no lights, the whole group held hands to each other, carefully.

Feeling hungry, we shared the remaining bread to eat, while eating, we were tired but still happy.

The road was so friendly brightened in the morning and now that in the evening only lightened up when there was a car passing. The big trucks, the containers went through with high speed made us extremely shock and scared.

Next day we departed to Hanoi. My friends still came back by motorcycles, while I still went by car. The car was so crowded as that was the time of college entrance exam, so you should take another time to avoid typhoons and summer rush.

The motorbike group went via National Route 4, Lang Son, running parallel to the border between Vietnam and China, the original way to go. I went through Thai Nguyen.

National Route 4 is associated with the historical events of the 1950 Border Campaign with names that have entered the national epic history such as Dong Khe, That Khe, Bau Lau Pass.

Besides, after the phuot cao bang vietnam travel trip, two young people became aCOUPLE. By the time this post is publiced, the wedding should have been held like in the dream …  Sweet flowers for you my friends <3 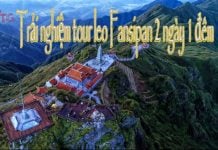 Cat Ba Island, Hai Phong – The call of sunshine and...